Today I have an extract from the upcoming sci-fi and fantasy novel Tempest Blades: The Withered King by Ricardo Victoria. This book is OUT NOW! So check out the links at the bottom of the page to grab a copy!

Check out the extract below, and keep an eye on this page for a review in the coming weeks. 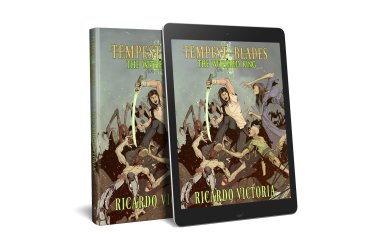 Fionn is the wielder of a legendary Tempest Blade, and he is blessed – or cursed – by The Gift. Though his days as a warrior are long over, his past leaves him full of guilt and regret. Life, however, has other plans for him, when he agrees to help a friend locate a missing person. Gaby and Alex never expected to become heroes… until they met Fionn. As an ancient evil arises and consumes the land, Fionn must help them to master their own Gifts and Tempest Blades. Together the three of them and their friends will chart a course aboard the flying ship Figaro to save the planet. Will Fionn’s past be an anchor, or will he overcome the one failure from his former life before time runs out? In a world where magic and science intermingle, anything is possible. Including second chances.

The sky was raging in fury, lightning slashing across the dark skies, the wind blowing away the mist. The square was being emptied, the townspeople trying to get as far away as possible from the giant creature, whose red eyes were locked on the man standing in front of him in defiance. Any other mortal would cower before the behemoth, but this one was smiling. The creature started a conversation, its deep, booming voice echoing all over the place.

“Not really my thing.”

The creature roared with anger, stomping its way across the plaza. Fionn didn’t waste time and jumped into the fray, slashing it with Black Fang. The creature replied in kind, raising its massive right claw and trying to shred Fionn like paper. He parried the attack with the sword, but the strength behind it almost broke his arm. He got ready to parry the second one, biting his lips to tolerate the pain, when an attack by Gaby on the creature’s back interrupted the exchange between them. Gaby’s twin blades were out of their sheaths and each shone with a clear, bright light, one glowing blue and the other red.

“Are those Tempest Blades too?” Fionn asked with an incredulous stare.

“Yes,” Gaby replied with her crooked smile. “Their names are Heartguard and Soulkeeper.”

“You are not the only one with secrets, Greywolf,” Gaby said. “But that will have to wait, there is work to do.”

Both Fionn and Gaby jumped, attacked, dodged and parried the blows coming from the creature. But after every attack that the creature suffered at the hands of Fionn and Gaby, it regenerated immediately. It was growing angrier by the moment, picking up trash cans and throwing them, breaking walls and destroying the windows of the shops and pubs. The creature kept throwing things at them, forcing them to take cover behind a semi-crumbled wall. Behind the cover, they saw the men-spiders returning, attacking the scared patrons who were trying to get away from the creature.

“Those civilians need help. Would it be too much to ask you to help them?”

“As much as I would hate to leave you with all the fun you are right. They need me more than you do.” Gaby winked at Fionn. “Be careful.”

Fionn could only smile at her with admiration in his eyes. Gaby ran towards the running people, not losing a second in attacking the men-spiders. Her blades were streaks of red and blue light in the dark. Parts of the spider-like creatures started to fly off. She was efficient, Fionn thought, too efficient even for a Sister of Mercy. There were so many things he wanted to ask her. But that would have to wait. A girl, running away from the conflict, broke a heel and fell in front of the path of destruction of the larger creature. Its collection of sharpened teeth was in full sight in a mockery of a smile. Seeing that, Fionn ran towards the girl, covering her with his body as the claw descended upon her.

“Oh shit,” Fionn managed to say before the creature hit him fully in the back with all its strength, sending him flying away with the girl in his arms. He managed to twist his body mid-air to absorb the blunt force of the imminent impact when they hit the ground. His jacket and the skin of his back were torn to shreds and he was bleeding profusely. His head was spinning. Fionn looked at the girl who was scared and crying, but safe. He shook his head to clear it and smiled at her.

“I will distract him while you escape. Can you run?”

The girl only replied with a nod and Fionn let her go.

She ran away into the streets. It was then that Fionn noticed a faint cut on his right cheek, a cut that started to heal amidst tiny green sparkles of energy.

This is gonna hurt tomorrow.

Born in the frozen landscape of Toluca, Mexico, Ricardo dreamed of being a writer. But needing a job that could pay the rent while writing, he studied Industrial Design and later obtained a PhD in Sustainable Design, while living in the United Kingdom and working in a comic book store to pay for his board game & toy addiction. He is back now in Toluca, living with his wife and his two dogs where he works as an academic at the local university. He has short stories featured in anthologies by Inklings Press and Rivenstone Press, and he was nominated to a Sidewise Award 2016 for the short story “Twilight of the Mesozoic Moon”, co-written with his arch-nemesis, Brent A. Harris. He also won a local contest for a fantasy short story during college. But hey! That one doesn’t count, does it?

Tempest Blades: The Withered King, his first novel, has been in the works for quite some time. He really hopes you get awed by its kickassery now that is available here:

Oh dear. This really isn't going down well. I adored the previous book but this is not the same!
My reading corner has finally become a reality.
I love it when flouncing is mentioned in book 😆
Book 32/2022
Book 31/2022
Penalties